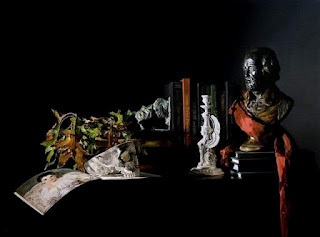 Customs House Museum’s National Juried Exhibition
WHEN: 10 a.m. - 5 p.m., Tuesday through Saturday; 1 p.m. - 5 p.m. Sunday, through Aug. 5
WHERE: 200 S. Second St.
COST: $7 adults, $5 seniors, $5 teachers and college students with I.D., $3 children six to18 and free for museum members and children younger than 6. On the second Saturday of each month, museum admission is free for all.
CALL: 648-5780
ONLINE: customshousemuseum.org
CLARKSVILLE, TENN. — What diversity exists in a national juried art show — and what luck we have that the Customs House Museum’s biennial juried exhibition is once again open to the public.
Among the 44 works are those that received official awards, as chosen by juror and artist Alison Oakes. The Best in Show prize went to Alessandra Sulpy for her painting “Sunshine, Lollipop & Rainbow Come for a Visit.” Second place went to Leslie Shiels for her colorful “Provincial Hound, Right.”

As with any show, the winners are a matter of preference — in this case the judge’s — but of course, viewers will have their own personal favorites.
Gore, to my mind, will be a favorite of those visitors who appreciate a classical painting style. His technical prowess is stunning. He has three pieces in the show.
Gore’s award-winning oil painting, “The Scottish Lady,” is done in the vein of the great still life painters of the early 1600s who flourished in the Netherlands. There is a dark intensity to his work that is taken straight from the refined execution of Dutch painters, who thought nothing of pairing a pretty floral arrangement with a stark skull.
“The Scottish Lady” to whom Gore refers is actually Lady Agnew of Lochnaw, Gertrude Vernon, who was painted in 1892 and 1893 by the famous American artist John Singer Sargent. Sargent had a knack for making lovely ladies famous with his brushstrokes, as he did with his “Portrait of Madame X” of Virginie Amélie Avegno Gautreau. (That sitter’s bare shoulders caused such a scandal at the time that the painter removed the piece from public display and kept it in his studio for almost 30 years.)
In “The Scottish Lady,” Gore paints Lady Agnew on the page of an open book, its side planted on the table by a skull. Nearby is a selection of books; one is entitled “Sargent in Italy.” The painting is a clever nod in several ways. It reveals that Gore takes his own inspiration from centuries past. It also asserts that even for the fresh bloom that was Lady Agnew, death hovers nearby; riches can protect no one from the meaning of that ominous skull.
Another striking oil painting, which won no awards, is Denise Stewart Sanabria’s “Impaled Strawberries.” Her buttery strokes of oil capture the berries’ glossy juice as it drips down the canvas. In the way that painter Wayne Thiebaud elevated cakes and pastries during the 1950s and 1960s, Sanabria has lifted the lowly strawberry to lofty heights.  And the results are delicious.

The oil painting “Symbiosis” by California painter Mei-Ying Dell’Aquila is also memorable. From a series called “Liberty,” it plays with our notions about the Statue of Liberty. Gone is the carefully looped hair, replaced by flowing curls. This young lady’s mouth is not soberly set. Instead, she gives the hint of a sly smile. This is a modern version of our nation’s beloved statue, a woman flanked by colorful dragons in a moment of surety.
Such a show as the National Juried Exhibition is a rare treat that allows audiences to experience contemporary art from an array of sources. While a number of local artists were included, this show takes viewers on a trip across the U.S. while never leaving the Crouch Gallery.
And what a trip it is.