I've got 3 of my Civil War reenactor lomography photos at this exhibit at Archetype Gallery in Atlanta's Studioplex on Feb. 26th and 27th. Reenactors travel around, and it is surprising to have some of them come to East Tn to act in an event, and when they start talking I realize they have no clue that this entire upper eastern part of the state supported the Union during that war. History is always complex. 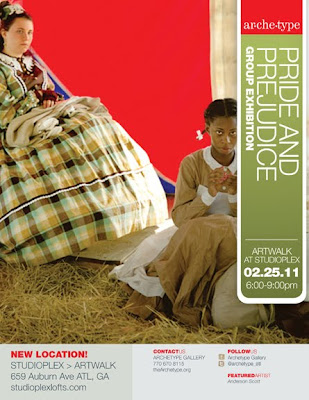 The image in the poster is a detail from a photograph by Anderson Scott.
Video of the exhibit, by Chris Hutchinson:
http://www.youtube.com/watch?v=h0X7c47n2cc
(My work is the B&W photography triptych)
This exhibition investigates the fascination in the reenactments of the Civil War and the linear historical context of the Antebellum South. Pageantry and romance surrounds the concepts of Secession, Slavery and the Confederacy. It is in this Romance where the Civil War is unique, whereas Germany banned symbols of the Third Reich- symbols of the Confederacy are flown with Pride & Prejudice.Where does this pride originate from, when the linear history of the War is clear, the South lost? Why are their monuments commemorating these concepts as heroic? These sentiments can be traced back to the lack of the transference of control- as what occurs at the end of War. President Lincoln did not treat the Southern Generals and leaders as traitors and treasonous- allowing most to keep there Pride & Prejudice intact. Chris Hutchinson
http://www.facebook.com/l/ac007h5fqeulW4VNyF83yC6kZ9Q/AR.CHE.TYPE
Participating artists:
Anderson Scott
Kate Windley
Bethany Collins
Denise Stewart-Sanabria
Bailey Barash
Dru Phillips
Brian Steele
Jonathan Callicutt
Whitney White
Posted by Denise Stewart- Sanabria at 6:52 PM No comments:

This is a group exhibit by museum curator Terri Jordan, that asks the question:"Who are you as an artist and a woman?" Artists in the exhibit are:
Claudia Balthrop, Mitzi Cross, Tammy Dohner, Camille Engel, Sher Fick, Mirranda Herrick, Terri Jordan, Linda Kerlin, Edie Maney, Cyndi McGrail, Alison Oakes, Shae Otto, Diane Shaw, Denise Stewart-Sanabria,and Sandra Paynter Washburn
~
I prefer not to look at this from a personal angle, because I don't see myself as a female artist- just an artist. My work occasionally is markedly feminist (like for this exhibit), but I'm interested in the human condition more than anything female-centric. I have always wanted to make a statement about a Manet painting that has always annoyed me: "Luncheon on the Grass". Two guys in a park who seem to full of their Bohemian artist-ness are briefly interrupted in their important philosophic and esthetic conversation to acknowledge someone watching them. They are proud because they are caught with a couple of naked groupie/muse girls. It almost seems like an indie band road trip moment. 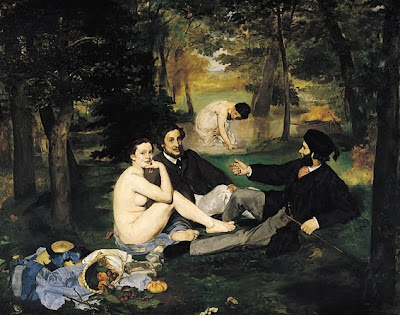 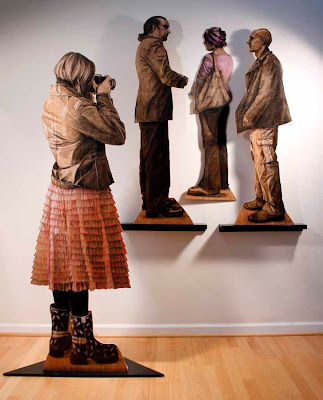 "Domination Extinction"
charcoal and pastel pencil on plywood / installation
My reaction to it is to reconstruct of the roles the individuals are playing in the original, one that I feel is more in keeping with the reality of the 21st century. The two males are still self-involved, but are monochromatic, like old black and white photos-a relic of the past. I have appropriately placed them on a shelf. The women contain color to designate they are of the moment. My model for the big drawing actually owned this crazy skirt-almost right out of a Manet ballerina painting-but she's no ballerina. She is the observer of the situation. The woman in the far background is Anonymous-symbolic of the role female artists of the past have been made to take by their work either being attributed to males, removed to museum storage, and written out of history by male art historians. Until, of course, the time I grew up in, the latter part of the 20th century. In the course of my career, women have evolved from an occasional name in a gallery listing to a normal presence not only as artists, but historians, curators, and critics. May things never revert to the past!
Posted by Denise Stewart- Sanabria at 9:50 PM No comments: