I've got work in two university galleries this October:

at the University of Tennessee/Knoxville UT Downtown Gallery, Knoxville TN
Dates: October 4 - 26, 2013
Reception: Friday, October 4, 5-9pm
Ossuary is a project curated by Laurie Beth Clark of University of Wisconsin at Madison.
It's first showing was at  the Chazen Museum of Art..
Installation views can be seen here.
It's second iteration will include the work of selected Tennessee artists. 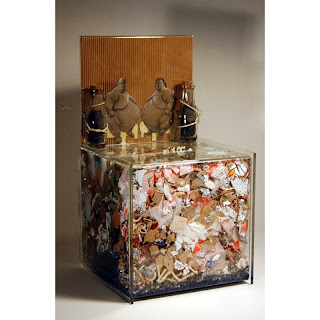 Landfill Consumption Legacy: 8.5” x 8.5” x 15” -  2013
Charcoal on paper, polymer clay “bones”, glass bottles,  plexiglass box, trash and detritus
~
The remains of human life are much more than a mere collection of bones, ash, or preserved body. It is rather an amassed collection of mostly buried remains of consumption over a lifetime that seems to grow steadily over time for each individual in the developed world. Despite attempts at recycling, the world of just a generation of two ago was much more adept at this skill, by simply using thrift as guide. My example of a rather physical manifestation of human extreme over-consumption might end up in small jars, but the history of their activity and behavior commands much more space.