"Art of the South": Wayne White and Number create an exhibit

477 South Main
M–F, Noon–5pm
Sat, Noon–7pm
~
We headed down to Memphis for the opening reception of Art of the South 2015. I needed to pick up a rather large artifact for a commissioned piece on the way, so we made a detour off I-40 to load it in the van.  Predictably, I saw something cool on the way. I was hoping it was an adult book store or something else of a scandalous nature, but we had already passed one of those, so figured there is only so much call for that business plan. It was only a thrift store in a zebra striped trailer on a gravel road. Only as in "only one".  With pink trim. You can't find these just anywhere. 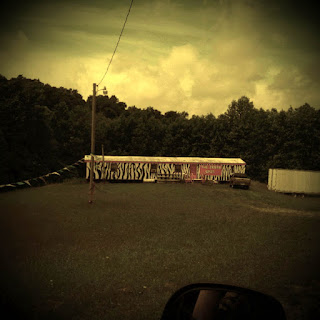 Knoxville had a definite presence in Art of the South, which is pretty cool since the regional exhibit was open to artists from Florida to Texas. Knoxville artists Brian and Carri Jobe just happened to come to the reception, talking about their new project, Locate Arts. (Brian, below, with the papers in hand). It is a very cool project- I'm excited about it. 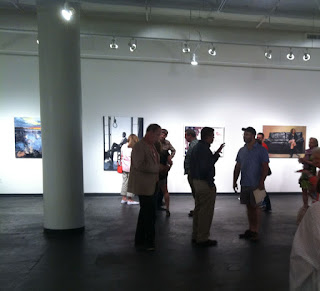 This exhibit was put together by the independent arts publication Number , which covers Tennessee, Arkansas, and Mississippi, and occasionally Northern Alabama. It is a fantastic regional art publication based in Memphis that has been in publication for over 25 years. (Yes, I often write reviews for them-since I think 2007. A couple of computers ago. My connection to them was in no way connected to me being in the exhibit, though. Is this a disclaimer?)
~
You never know where people come from during receptions- there were a bunch from New York I met that were hanging around with my plywood drawings. I swear, I should have brought my real camera. Even iPhone pics can be rather blurry at night. Just for that, I think I'll post a better
pic of my piece below the gallery image:

Gary Monroe of Knoxville had one of his huge new Comedy County Cocke series drawings selected. 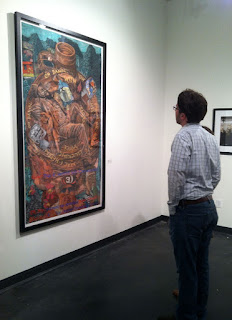 Briena Harmening, an MFA recipient from UT Knoxville, now living in Nashville, had one of her crochet text pieces there. 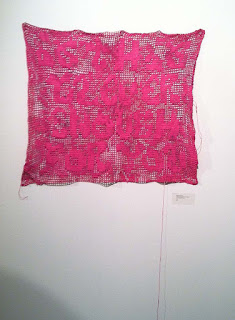 Shana Kohnstamm, another UTK grad living in Nashville makes amazing felted sculptures. This one is based on a species of shrimp that is more scorpion than anything else.
Shana and I hung around talking about materials and paper making with Arkansas artist, professor, and farmer Melissa Cowper-Smith. She grows her own cotton that she creates hand-made paper with. Really awesome, super organic looking paper.
You can't have an exhibit of Southern regional art without a Herb Williams crayon sculpture-this one suspended. 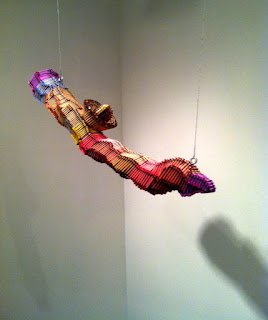 I really really like this- the idea was amazing and yes, people thought they were some kind of stone. Noooo- found erasers!
A couple more pieces I really liked, below. If you are familiar with the juror, Wayne White (bio below), you can really see the connection between the work selected and his own passions!


Wayne White is an American artist, art director, illustrator, puppeteer, and more. Born and raised in Chattanooga, Tennessee, Wayne has used his memories of the South to create works for film, television, and the fine art world. A graduate of Middle Tennessee State University, Wayne traveled to New York City where he worked as an illustrator for the East Village Eye, New York Times, Raw Magazine, and the Village Voice. In 1986, Wayne became a designer for the hit television show Pee-wee’s Playhouse, and his work was awarded with three Emmys. In Los Angeles Wayne continued to work in television and designed sets and characters for shows such as Shining Time Station, Beakman’s World,Riders In The Sky, and Bill & Willis. He also worked in the music video industry, winning Billboard and MTV Music Video Awards as an art director for seminal music videos including The Smashing Pumpkins’ ‘Tonight, Tonight’ and Peter Gabriel’s ‘Big Time.’
More recently, Wayne has created paintings and public works that have been shown all over the world. His most successful works have been the world paintings featuring oversized, three-dimensional text painstakingly integrated into vintage landscape reproductions. The message of the paintings is often thought provoking and almost always humorous, with Wayne pointing a finger at vanity, ego, and his memories of the South. At Rice University he built the world’s largest George Jones puppet head for a piece called ‘Big Lectric Fan To Keep Me Cool While I Sleep.’ In 2012, Filmmaker Neil Berkeley chronicled Wayne’s art and adventures in the irreverent and joyful documentary film, Beauty is Embarrassing.
Posted by Denise Stewart- Sanabria at 11:43 AM No comments:

The ETSU Department of Art & Design and Slocumb Galleries in partnership with the Arts & Culture Alliance of Greater Knoxville and Urban Redevelopment Alliance present ‘Knoxville Now’ from June 4 to 25, 2015, at the Tipton Gallery. The exhibition features 35 current work in various media by Arts & Culture Alliance of Greater Knoxville members curated for the Blue Plum Music and Arts Festival in Downtown Johnson City. The public reception is on June 5th, First Friday from 5 to 8 PM, the exhibit may be viewed during the festival weekend on June 6 & 7 from 12 to 5 PM.


For the third year in a row, the Arts & Culture Alliance of Greater Knoxville is proud to partner with a community-based art gallery in the Southeast for the purpose of promoting local artists within each community. “Similar to the Alliance, the Tipton Gallery promotes and supports regional artists through rotating exhibitions and educational opportunities for the community,” says Liza Zenni, Executive Director of the Arts & Culture Alliance. “While many of our artist members are well known here in the Knoxville area, we want Johnson City to be exposed to their work, and we look forward to Johnson City artists receiving extra exposure here in Knoxville.”

In exchange, the Arts & Culture Alliance will present an exhibition of works by Faculty of the Department of Art & Design at East Tennessee State University at the Emporium from August 7 to 29, 2015. The Tipton Gallery is located at 126 Spring Street in downtown Johnson City. Gallery hours are June 6 and 7 (Saturday-Sunday), from 12 to 5 PM during the Blue Plum Music & Arts Festival (www.blueplum.org), Thursdays from 4 to 6 p.m., and by appointment.  For more information about Tipton Gallery or to schedule a visit, please call (423) 483-3179, email contrera@etsu.edu or visit http://www.etsu.edu/cas/art/slocumb/.
Location Information:
Tri-Cities/Community - Tipton Gallery
Posted by Denise Stewart- Sanabria at 12:58 PM No comments:

ArtFields 2015 and Dancing With Bill Murray

ArtFields is a major Southeastern Regional based on the Grand Rapids experiment, Art Prize.  The purpose of these non-profit experiments is for a community to hold a major fine art event with a massive amount of award money, and to see how this builds the city's relationship with the rest of the art world, and also how it enriches the host community in both fiscal and cultural ways. ArtPrize is international, and gives out over a half million dollars in awards to artists. They don't pre-jury the artists, so it is more of a free-for-all. ArtFields, held in Lake City, SC, pre-juries, leading to an overall higher quality result. They give out $110,000.00 in awards. The pure gallery venues are pop-up galleries located in empty store fronts, beautifully renovated tobacco warehouses, and the event's personal gallery. The integrated art venues are in the town's stores, restaurants, barber shops, salons, library and museum spaces.
This is the 2nd Year I've been a part of it! I blogged last year, too.
I was present for the last 2 days of the  total nine days of performance, community participation events, and artist events and parties. The town center is easily walkable, so it's an easy day to hit every venue.

My work, above, Riding the Big Gun, was once again in the ROB, a massive and beautifully renovated tobacco warehouse. It has the architecture to hang heavy suspended work from it's rafters, and some of the largest installations and individual pieces. 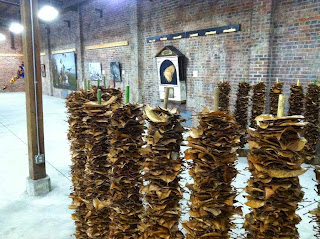 The building was also ideal for performance.
~
I like humor in work. Some people don't quite get how serious it is.
Some of the best venues were empty store fronts. I'm not sure if they had great lighting to begin with, or if it was added.
The ArtFields official gallery space, below, that is used year round, the Carter Jones Gallery, was particularly impressive.
I think the best private building setup, 2nd year running, is Jarrito's Mexican restaurant. Yes, the "gallery" below is their banquet room. Venue owners get dibs on what work they want, and there is definate evidence of what type of work they relate to in various places. 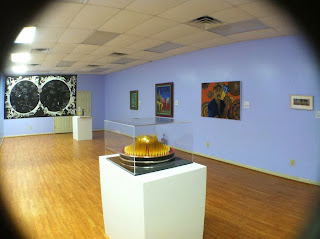 Jarrito's had to go after the Catholic humor, below. I want that painting.
How the various clothing stores worked art into their spaces could be very cool. Below, Mosaic clothing store.
The two pieces below were in Seven Boutique and Monogramming. I loved the ironing board mono prints. Such a cool idea. Roberto loved the truck.
I really liked the old parking lot in front of the ROB building and played cell phone app with it. 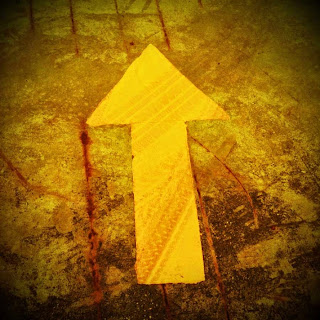 The event had lots of great events scheduled. The champagne and dessert reception for artists was right before the award ceremony at the performance stage, but it was in the lobby of a new boutique hotel a few blocks away. At one point, people began to receive photo texts from friends taking selfies with Bill Murray near the stage. I never saw him, but my friend Kathy Holland of Oak Ridge, TN, who was also exhibiting managed to find him- AND dance with  him. Let me quote her "Nyeh nyeh!  I touched Bill Murray! Nyeh nyeh nyeh nyeh nyeh!!  Then I danced with Bill Murray!"
Posted by Denise Stewart- Sanabria at 2:13 PM 1 comment:

The Tomato Head has been Knoxville's most cult, alternative art venues for..I think it's decades now?? I first exhibited my plywood drawings there almost a decade ago, which was awesome. People I had drawn went in and actually sat underneath their effigies. Last year, I was thinking it would be so cool to have my food paintings in there. It would make so much sense. When I proposed, they said yes!
I've got a bunch of my culinary paintings in their Downtown Market Square location for the month of May, and they will move to the Gallery Shopping center out west for June. 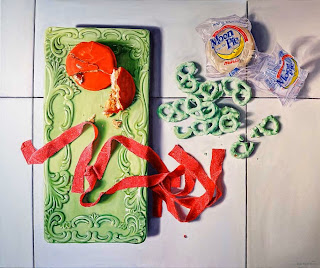 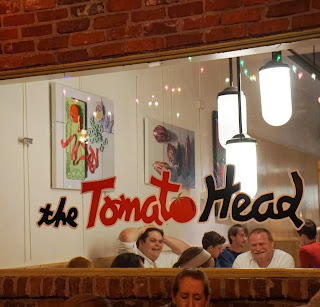 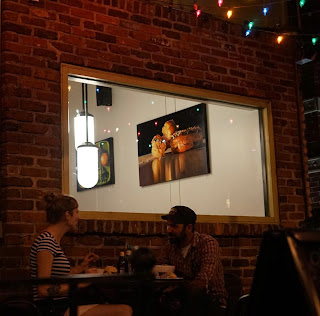 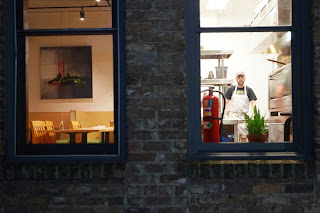 Posted by Denise Stewart- Sanabria at 10:01 AM No comments:

I'll be having a 4 page article in the Fall/Winter issue of Direct Art Magazine! http://www.slowart.com/damag.htm  It will focus on my plywood drawings. 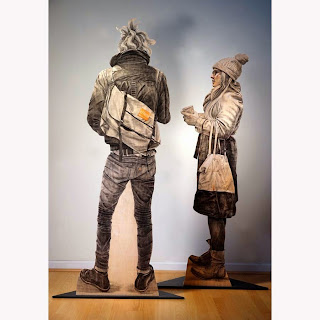 Posted by Denise Stewart- Sanabria at 9:50 AM No comments: