Alison Oakes and I Head West for Exhibit Talks

The Customs House Museum in Clarksville, Tennessee, had two exhibits sharing the same reception on May 12, 2012: Quantum Confusion, my solo exhibit, and their National Exhibit, juried by Alison Oakes; painter, and professor of drawing at Pellissippi State Technical College in Knoxville. Another shared road trip! I like road trips with Alison. I would be talking about the ideas behind my installation, and Alison would talk about her jurying process, and handing out the awards she would give after seeing the work in person for the first time. 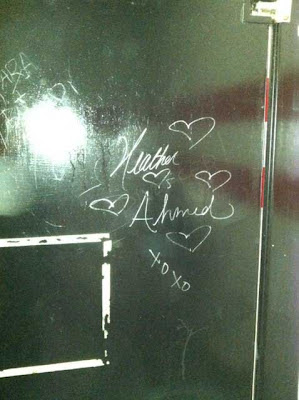 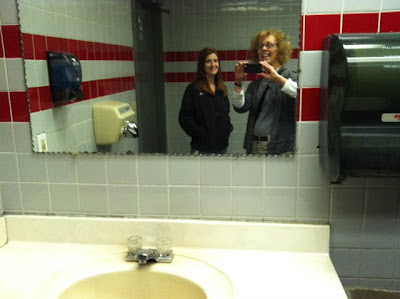 This restroom had way more patina then you can see in the photo. We decided we didn't want to buy any snacks there. We have very high snotty standards. It would have to at least be a Pilot station. 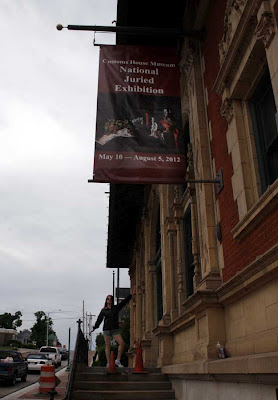 The Customs House Museum is housed in an 1898 building originally designed for use as a Federal Post Office and Custom House to handle the large volume of foreign mail created by the city’s international tobacco business. It is built on the site of a former boarding house. The structure was designed by Federal Treasury Supervising Architect William Martin Aiken, and is attached to larger, modern additions. It is the second largest general use museum in the state. We love their outside exhibit banners. 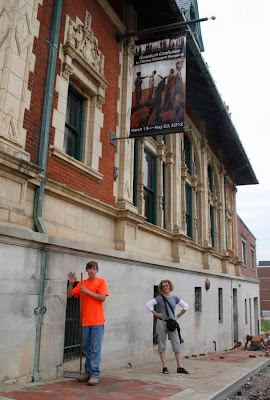 My banner came with an entire sidewalk cleaning crew to keep things nice. 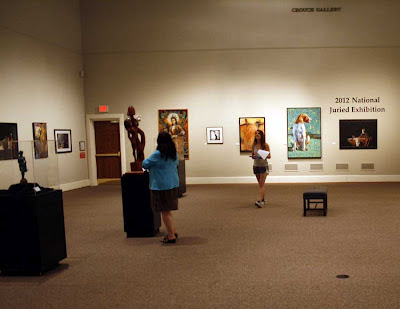 Alison's awards go to Alessandra Sulpy of Erie, PA (1st), Leslie Sheils of Cincinnati, OH (2nd),Greg Sands of Clarksville, TN (3rd), and two Honorable Mentions to both Matthew Deric Gore of Nashville, and Elizabeth Porter of Knoxville. Museum curator Terri Jordan waits for the results so the programs can be printed out. 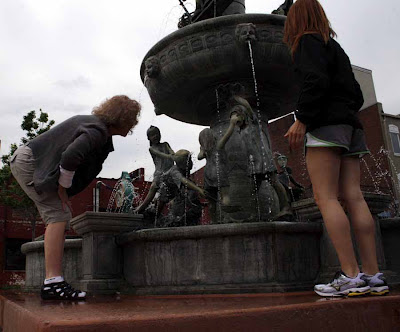 We now have the rest of the day until the reception to Do Stuff. There is a lot of outdoor sculpture in Clarksville, and this is the one that the art community gets annoyed with. It is some kind of pre-fabricated fountain with add-your-own-children. The kids are supposed to be playing, but at the right angle they appear to be engaged in some kind of epic battle. 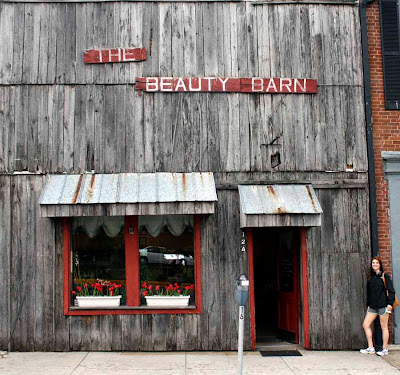 Downtown Clarksville is a beautifully restored small city with gorgeous turn of the century homes and public buildings. Mostly. I'm not sure how this got here. 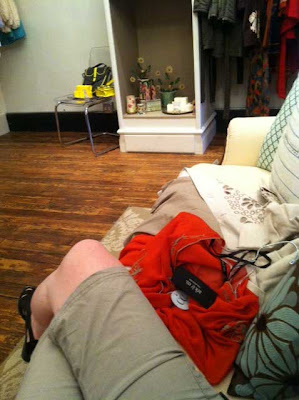 Nothing is better than finding small, independent clothing stores where the buyers like really cool stuff. We hunted successfully. 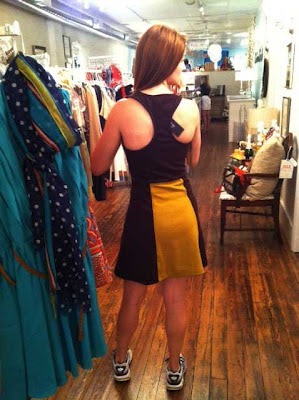 I tried to make Alison buy this one because it says, "I'm a hard core gym trainer", because that is her other job when she isn't teaching drawing. 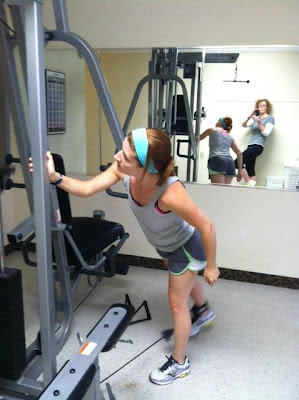 And we found a gym! Kind of. Your basic hotel tread mill, bike and multi-station deal, and nothing was busted so they got an A for that. We left when the couple came in to work out wearing slide on slippers. Alison set the tread mill up for her, then we got out before her slippers flew off and she landed face first on it, or maybe she was going so slow she survived? 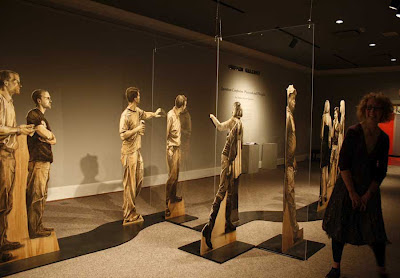 Reception time. I love the size of the gallery my installation is in-it allows it to be isolated in a pool of spots. The reception food was gorgeous. 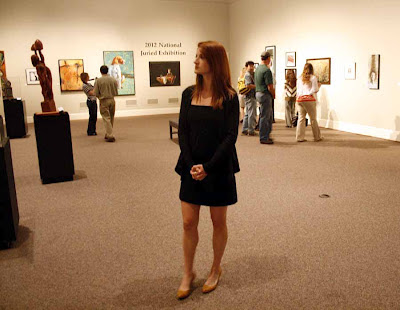 The gallery space the National is in is killer. They have done amazing things in here, everything from hanging Adrienne Outlaw's mummified body installation from the ceiling to mounting animal heads high on the walls. The last exhibit had woman writers painting their narrative texts directly to the walls-floor to ceiling. 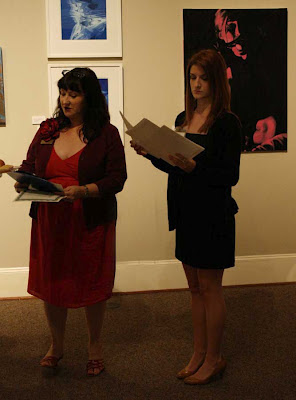 Awards time for Terri Jordan, the museum curator, and Alison. 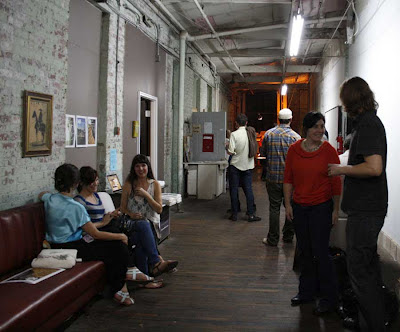 We headed straight to Nashville after for a series of events in the May Hosiery Mill on Chestnut Street. It contains a bunch of artist studios, Seed Space cube gallery in Adrienne Outlaw's studio, and the release party for the latest issue of Number, an independent art journal I've been writing for quite awhile now. Based in Memphis, it covers Tennessee, Arkansas and Mississippi. I finally meet recent interim editor Jennifer Gonzales from Memphis College of Art (in red), and her art collaboration partner, Nathaniel Hein of Mississippi's Delta State University. They are know as go.hein, and produce conceptual constructions addressing societal issues. 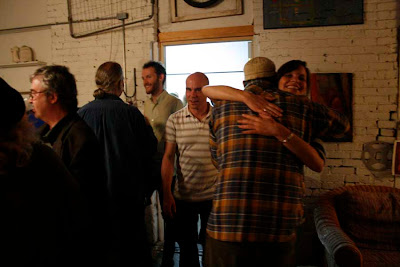 New editor Chuck Beard doing The Hug in the plaid shirt. It was a happy night. This was issue NO 71, and the 25th year the journal has been around. The issue looks fantastic. http://www.numberinc.org/ 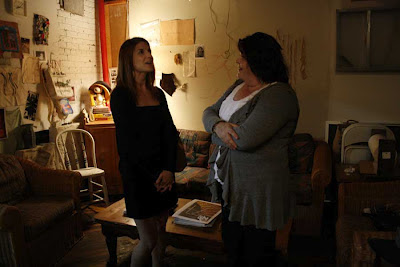 We run into artist Sher Fick in Adrienne Outlaw's studio. We have all exhibited together at one point or the other. The Southeast is a large geographic area, but the arts community here connects with a sense of familiarity that I love. 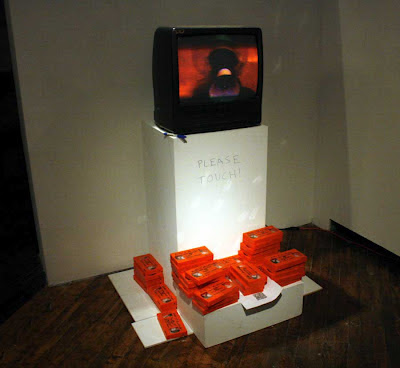 The exhibit in Seed Space is SUPER LONG PLAY! by Benton C-Bainbridge and collaborators. SUPER LONG PLAY! is an interactive ‘old media’ installation that uses abandoned tech to move minds, bodies and souls. Obsolete VHS and CRT equipment creates an electronic cinema ‘time machine’ back through the creation of a dance and media art work made by Benton-C Bainbridge with his collaborators,Ezra Bainbridge-Powers, Perrin Ireland, Erin Law, Tony Youngblood, Ryan Hogan, and Johnny Invective. 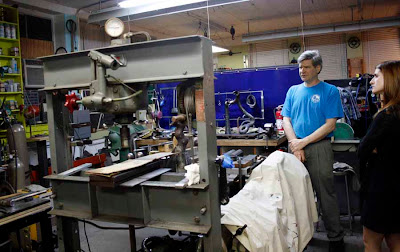 We head upstairs to Victor Schmidt and Anise Doak's studio. Between the both of them-he is a metal sculptor, she works in wood, there is every tool I could ever hope to play with. Victor recently had an exhibit in Knoxville that I helped with as far as some installation was concerned, and he also had a piece in the Dogwood Regional Fine Art Exhibit, which I have been chairing for the last four years, so it was cool to see where he works.
We head back to the hotel in Clarksville, and wake up to an exciting event before heading back to Knoxville:

CLARKSVILLE, Tenn. (AP) — Power has been restored to about 12,000 people after a snake slithered into a Clarksville Department of Electricity substation and caused the outage. The Leaf-Chronicle (http://leafne.ws/JIflek) reports electric crews found that the snake made contact with electrical equipment inside the primary substation, which caused a system protection device to trip and disconnect power to around 5:30 a.m. Service was restored to all customers by 8 a.m.

Information from: The Leaf-Chronicle, http://www.theleafchronicle.com © 2012, The Associated Press. All Rights Reserved.