The 4th annual ArtFields took place April 22-30 in downtown Lake City, South Carolina.  400 works of art, from artists in 12 Southeastern states – Alabama, Arkansas, Florida, Georgia, Kentucky, Louisiana, Mississippi, North Carolina, South Carolina, Tennessee, Virginia and West Virginia were exhibited in venues across the downtown business district. The  artists competed for their chance at a share of $110,000 in cash prizes, awarded based on visitor input and a panel of acclaimed judges and educators. Yes- this is the SE version of Grand Rapid's international "Art Prize". More intimate, and actually having a much higher level of work, in that the work is pre-juried by museum and art professionals before it can find a venue.

My piece this year: 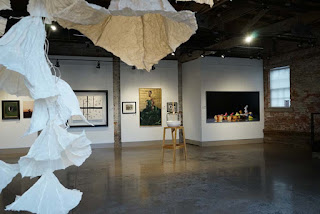 The Cult of Spring was in Jones-Carter Gallery 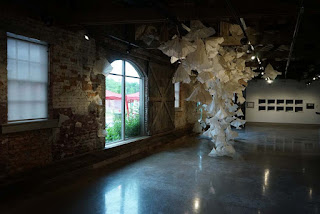 View out the front windows of the gallery to the food truck venders. Jocelyn Chateauvert's invasive Species is suspended from the ceiling
~
Random work I saw and liked:
work at the ROB 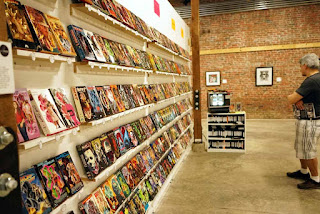 This is the Big Whammy winner above: Charles Clary's Be Kind Rewind
Each VHS tape box in this faux video store installation has embedded cut paper carvings in multiple layers. The layers are divided with tiny blocks of foam core. Both the meditation of the process and the finished results are equally important. I was excited. Clary comes from a town just east of Knoxville, and I had exhibited with him in a group exhibit a couple years ago and loved his work. He is now a professor at Coastal Carolina University, and I had just gone to Myrtle Beach to see his solo exhibit just a month before while I had been having a solo exhibit at the aforementioned University. The artist community in the SE is pretty intimate. Oh- at the Myrtle Beach Art Museum they had a video showing Clary's working process, which is all hand cutting. No lasers. 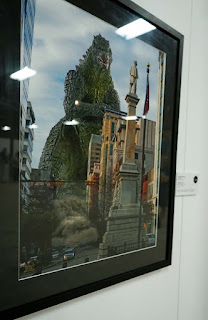 Yes, Godzilla is helping to take down that offensive flag that had been hanging over the SC Capitol building since the Civil Rights movement.  Seriously, SC? by Sean McGuinness. 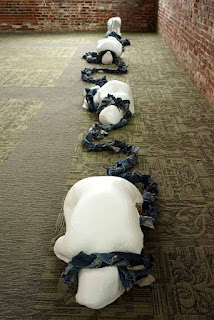 The Mill Struggle, Unraveling the Southern Strategy by Amanda Ladymond was at The Livery Stables, among other installation and large-scale work.


~
Art in Mosaics clothing store. They always have large sculpture outside the dressing rooms.
~
Large sculpture outside all over town
Art in Joe's Barber Shop
Walking around Lake City during ArtFields, I ran into the mayor, who explained that these postings below were a kind of hide and go seek to find the large bronze sculpture of Huey Cooper. (The mayor was wearing a shirt with Public Works Dept. or something embroidered on it. No shirt and tie. He gets points from me on that!) 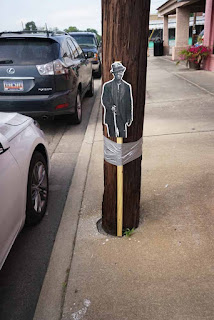 What does it say about a town whose two main commemorated characters are an astronaut and a cool guy that was everyone's friend? (Cooper carried around a rabbit's foot, and for a nickle, would let you rub it for luck. Everybody loved this guy.There is a donation coin slot in the sculpture) I think it says they have great priorities. 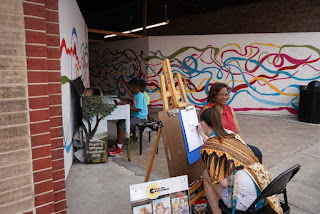 They have pianos all over town just sitting there for people to play, and I swear everyone living here knows how. This kid is belting out Beethovan's Für Elise while his mom gets her portrait done by a sidewalk artist. 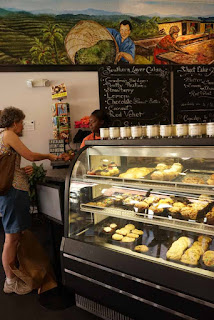 We spent a lot of time at Baker’s Sweets Bistro & Bakery. Great menu and coffee. 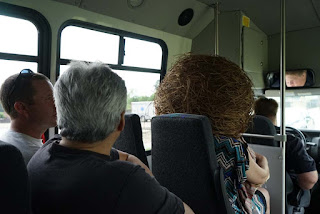 They had a shuttle bus to take you out to the ROB, a renovated totobacco warehouse, the furthest venue. Yes, that woman has a stick sculpture on her head. 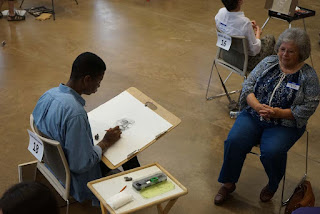 Also, every year there is a portrait competition as part of ArtFields that 24 selected artists participate in that partners one model per 2 artists, with  awards of $1,000, $500, and $250. It is done like a reality TV show, where they eliminate a group of artists after each one hour session (I've been eliminated in the 1st round for 2 years, so this year I took a breather to get my nerve up again. I always freeze and tighten up). Two friends of mine participated again and I watched the whole process, fascinated. It is usually the ones painting who walk away with the big award, but this year it was Emmanuel Ogbonna using charcoal on paper!

Posted by Denise Stewart- Sanabria at 12:46 PM No comments:

Rebecca Randall Bryan Art Gallery /Coastal Carolina University, Conway, SC
Denise Stewart-Sanabria: Quantum Continuum,
February 29 and runs through Friday, April 1, 2016.
~
I installed a new iteration of my quantum physics multiverse installation at Coastal Carolina University with the hanging plexiglas portal this spring. The gallery space enhanced it in some really cool ways- the green walls on one side of the gallery, which I divided by hanging sheets of 4' x 8' plexiglass, suggested one world, while the white on the other suggested another. 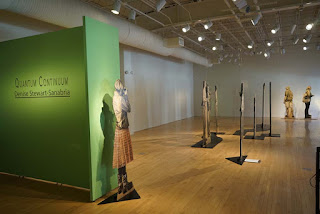 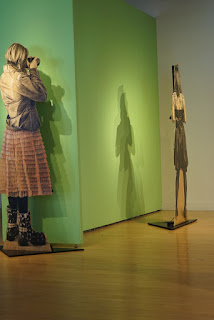 The excellent lighting did great tricks with shadows. 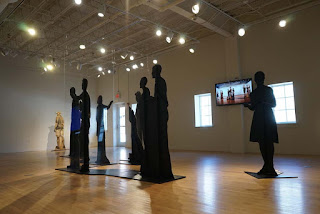 The wall monitor playing a slide show on a loop created an interesting recto/verso view of the installation. The black silhouette rear view is just as important as the charcoal drawn fronts of my pieces.
Gallery director Jim Arendt leads a class discussion.
Lecture day.
~
One of my favorite side diversions when visiting a new place I'm exhibiting in is just wandering around aimlessly with my cameras and looking for interesting stuff. Conway has a small and really welcoming downtown. Arendt had encouraged me to visit the historic haunted graveyards, and what I found was rather tragic. Besides the expected civil wall casualty graves, there were an astounding number of children's graves from one family, just in one year. I discovered there was an influenza epidemic that was almost as horrific as the 1918 one that roared through here in 1858-1859. I had never seen tombs with glass-enclosed marble statuary before. 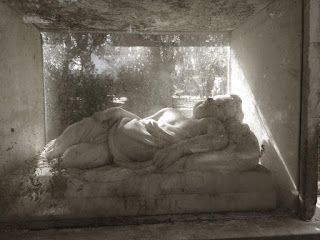 On a lighter note, though the downtown had a diverse bunch of excellent restaurants and trendy stores(Black Thai was my favorite restaurant), a local coffee roaster (Rivertown Roasters), they also had some remnants of the previous century, desperately still clinging on. What is not to love about a department store time has past by? Though their mannequins have been through many violent battles, they persevered. Though it was April, Christmas lingered on. It made me miss Knoxville's last 20th century downtown remnant, J's MegaMart. 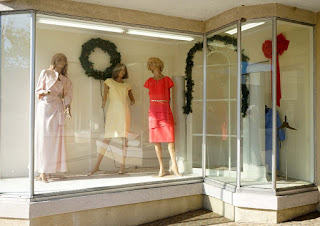 Posted by Denise Stewart- Sanabria at 10:22 AM No comments: