Painting Process: The Loss of Virginity

I have had a request to show process shots of one of my paintings, so OK, Terrell Thornhill- here they are.
The Loss of Virginity
oil on canvas
36" x 48"

The whole thing was done in 3-4 layers of  working over a white background. I have no idea why these 1st 2 working images came out so lousy.

Posted by Denise Stewart- Sanabria at 7:51 PM No comments:

Three new Produce Portrait paintings are available at Atelier Gallery, 153 King Street, Charleston, NC.
Still Lifes, or Vanitas, which is the genre these works most closely fit in with, were originally domestic images containing items symbolic of life and death. The items in mine act out narratives in keeping with human behavior and cultural social structures.


Posted by Denise Stewart- Sanabria at 12:39 PM No comments:

Archival prints of original bank ledger sheets from 1916-1947 form a stitched, grid base for the construction of images referencing the function and philosophy of banking from the early 20th century into the beginning of the contemporary era. The roots and growth of the bank, symbolized by the banks tree logo, flow over the tellers desks, ledgers, and state map sections. The original bank location and the new Green Hills location are marked with glass optical orbs in the map section of the western part of the state. The mechanisms and tools of the record keeping of banking are represented by the vintage typewriter parts that appear over the old, handwritten ledgers. The ink found on the ledgers changes by the year, most dramatically in some samples from the 1930 ledger, one of the most traumatic banking years in US history, where pages would fluctuate from full strength ink, to watered down ink, to pencil, then back again to full strength ink, demonstrating the thrift and persistence that enabled the bank to weather even the toughest of times. 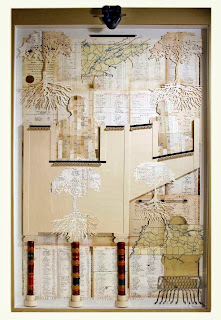 There is a really nice collection of art in this new bank. Some of the other artists represented are Andy Saftel, Norman Lerner, Phil Savage to name a few. The commissioned work was from both myself and   Carrie McGee.

Carrie McGee makes transparent resin sculptural work that is either wall hung or suspended. The imagery in them is from both chemical reactions and photography. 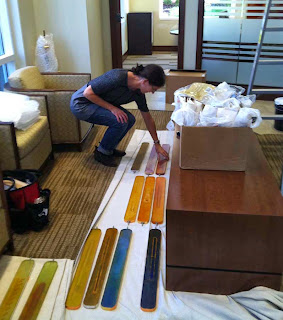 They are wire hung with some really cool hardware she gets from Japan. This piece fits into the banks rotunda. 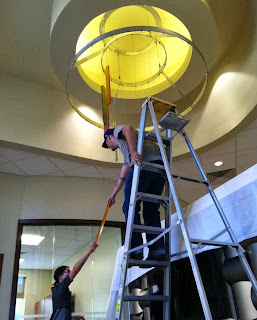 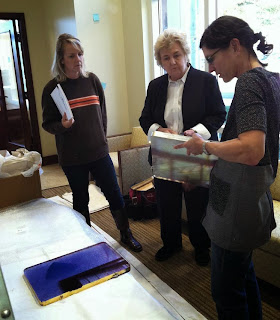 The buildings architect,Carin Jeffords of Vaughan Associates Architects, and The Arts Company director Anne Brown look on as Carrie describes the process of getting photographs she had taken of the buildings steel beams in the early stages of construction into the resin. 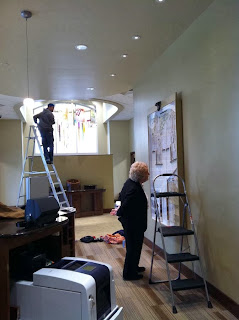 Both McGee's and my work are just installed, along with some really slick new high tech bank machinery. My piece was an easy install- just a simple oak French cleat hanging bar with 3 screws, and it was good!


Posted by Denise Stewart- Sanabria at 8:47 PM No comments:

New Arts in the Airport exhibit

The latest  Arts in the Airport is up at McGhee Tyson Airport. It will be there for the next 6 months. This program is coordinated by The Arts & Culture Alliance of Greater Knoxville and the Metropolitan Knoxville Airport Authority. This latest exhibit was juried by Jeffery Morton, professor at Covenant College in Lookout Mountain, GA. He selected 43 pieces, both 2D and 3D, from the 523 works submitted. All work is behind security, so you need to be a ticketed passenger to see it.
Morton's exhibit statement:  “In our frenetic fast-paced world of smart phones, on-the-go coffee stops, and continental travel, it seems appropriate to house a collection of artworks in a busy space such as the airport. Art has an ability to capture us in time, and perhaps now more than any other we need to stop, look, and listen. Whatever we feel about traveling to and from places, the art in the Knoxville airport was chosen to give the passerby an opportunity to share the same question asked by these artists: how do I balance a life of speed with a life of pause. It seems that the art and artists in this collection answer the question by looking closely at the world with wonder and delight.”

I've got 2 of my Contemporary Mythology Invention altar series there.

Posted by Denise Stewart- Sanabria at 8:43 AM No comments:

From These Hills, Contemporary Art in the Southern Appalachian Highlands

at the  William King Museum   in Abingdon, VA opened Oct. 17th with a private reception that included a lecture by Steven Maticjio, who chose the 20 regional artists included in the exhibit. Formally curator of SECCA, Southeastern Center for Contemporary Art, in Winston-Salem, NC, he is now curator of the Cincinnati Contemporary Art Center.
This is the William Kings 11th regional biennial of artists working in the Southern Appalachian region of Southwest Virginia, Northeast Tennessee, Western North Carolina, Southern West Virginia and Eastern Kentucky. The exhibit will close February 16th, 2014.
~
So- on to images of the exhibit, with a bit of info on some of the artists I know or whom I've met. 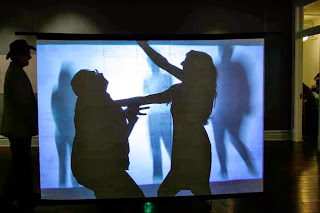 Callie Hietala, Director of Museum Programming, and Leila Cartier, Curator, have fun interacting crime scenes between the projector and wax paper screen of Edison Midgett's After Here. Part of the dynamics of the piece is the ability of the viewer to insert themselves into the open ended narrative of the 18 minute video loop.

I've been a part of two wonderful exhibits this October in both the University of Tennessee Downtown Gallery on Gay Street, Knoxville, TN, and Tipton Gallery, the downtown gallery of East Tennessee State University in Johnson City. (The university is also home to Slocumb Gallery, and the Carroll Reece Museum). 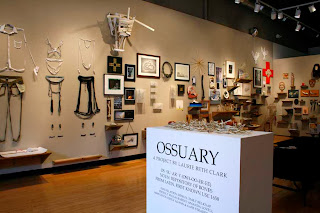 ABOUT THE CURRENT EXHIBITION

Three hundred artists have contributed to this Ossuary. Their work, in many media, includes single bones, clusters of bones, and art works inspired by, using, or playing with the idea of bones. These bones are political statements and personal elegies, memorials to individuals and statements about mortality. They represent connections to our ancestors and/or to our descendants. Some works are serious and some use bones in a completely playful manner.

Ossuary was developed in response to the repositories of bones that have accured in countries like Cambodia and Rwanda, but Ossuary is not a project about those traumas. Rather, Ossuary offers a poignant counter-image to mass violence. It is a project about the hope that art brings.

Images and statements for all the bone works from this iteration can be found online at  www.ossuaries.net 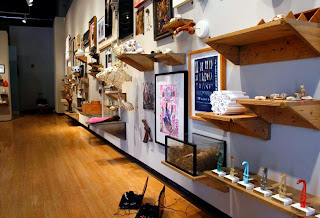 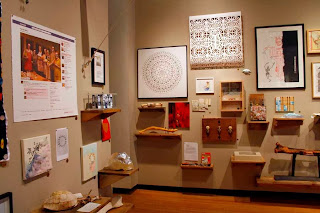 Ossuary is a cummulative traveling project. It began in Madison, Wisconsin. Artists interested in contributing bones to future exhibitions should write to ossuaries@gmail.com.

This relational project was initiated and developed by the artist Laurie Beth Clark. Clark, who is a Professor in the Art Department at the University of Wisconsin, has shown work in galleries, museums, theatres, and public spaces in North and South America, Europe, Asia and Africa. Extensive documentation of prior projects can be found at www.lbclark.net
Ossuary features over 300 works from artists around the world. Many contributions come from Knoxville-area artists. 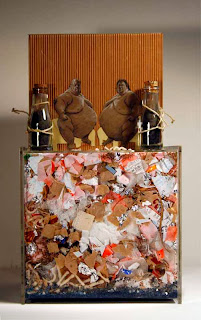 
The remains of human life are much more than a mere collection of bones, ash, or preserved body. It is rather an amassed collection of mostly buried remains of consumption over a lifetime that seems to grow steadily over time for each individual in the developed world. Despite attempts at recycling, the world of just a generation of two ago was much more adept at this skill, by simply using thrift as guide. My example of a rather physical manifestation of human extreme over-consumption might end up in small jars, but the history of their activity and behavior commands much more space.
~ 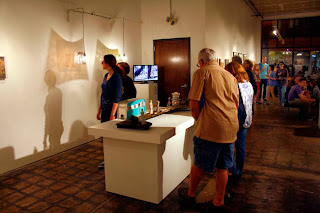 My "One Epoch" piece on pedestal, Adriane Little's work on wall and video screen

“Envisioned Landscape: A Group Exhibition” features work that manipulates the landscape and embeds it with a more complex content.  The co-curators are interested in exploring the artists’  ‘created’ and ‘imagined’ terrain as opposed to its traditional representation of scenery as it is. Some of the envisioned landscape presents its subject as apocalyptic or mystical and even psychedelic, revealing the artists’ exploration of media and their efforts to push the boundaries of what is considered ‘landscape’.
The participating artists are: Diane Fox (Tenn.),Megan Levacy (Ga.), Adriane Little (Mich.), Allison Luce (N. Carolina), Theresa Markiw(Tenn.), Mary Nees (Tenn.), Mary Bates Nuebauer (Ariz.), Esther Randall (Ken.), Suzanne Stryk (Va.), and Denise Stewart-Sanabria (Tenn.). Sculptor Mary Bates Neubauer will present a lecture at the Art Annex on October 3, Thursday at 11:30 a.m.
The “Envisioned Landscape: A Group Exhibition” is sponsored by Department of Art and Design, Urban Redevelopment Alliance, Women’s Studies Program, and Women’s Resource Center.  For more information, contact Karlota Contreras-Koterbay at 423-483-3179 or the Women’s Resource Center at 423-439-5772.  The Tipton Gallery is open on First Friday receptions from 6 to 8 p.m., Thursdays from 4 to 6 p.m. and by appointment. The exhibit and lectures are free and open to the public.

Posted by Denise Stewart- Sanabria at 1:09 PM No comments: