"Lexington Art League is excited to announce the return of our ever-popular figure show with this exclusive evening of art, music, and dancing. The Fourth Friday for Demographically Speaking, a Figurative Exhibition will provide a look at the exhibition curated by Daniel Pfalzgraf, Chief Curator of the Carnegie Center for Art & History in New Albany, Indiana. Posing the question, 'whose stories are being told in the art world?' the new dimension and unique perspective Pfalzgraf brings to the traditional figure or nude show aims to provoke audiences to consider the diversity of our city, our region, and our country through stories of identity told through art."
~

I had three plywood installations of three plywood drawings each in the exhibit. Pfalzgraf, who was present and whom I got to speak with, wanted to see what an entire room of them would look like. They were appropriately housed in the room where the reception drinks table was placed. They did their virtual reality thing while remaining sober.
Having a major Arts non-profit housed in a place as fantastic as the renovated Victorian mansion known as Louden House is a coup for any city. The entire ornate interior has been made sculptural and simplified by a solid coat of white paint. Their exhibits take over every stately room and hallway. I had been to previous exhibits, and really wanted to see my work impacted by those surroundings. Their upper floor is leased studio spaces.
Though this was a national exhibit, most of the artists were regional, and I always get exited when I find I'm exhibiting with people I know or have exhibited with before. I had exhibited previously with Yvonne Petkus, a professor at Western Kentucky University, at The Customs House Museum in Clarksville, TN in an exhibit curated by Terri Jordan. Petkus had two paintings in the exhibit. (below, left) The ink drawing over the mantel is of a body-less pair of dropped pants by Hayward Wilkerson. 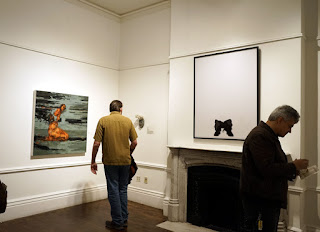 Randy Simmons, professor at the Paducah School of Art and Design has curated my work into three past exhibits in two separate venues in Paducah, and I was in Drawing Discourse with him at UNC/Asheville in 2016. He does largely reductive charcoal drawings, and his Pool Series: Alex was also in the same gallery room as my work (below). 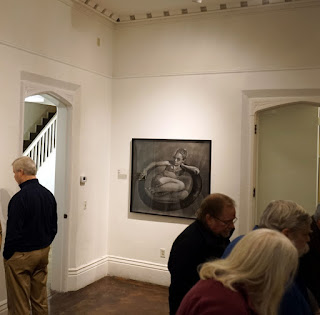 The staff at LAL came up with the excellent idea of having three hours of nude life-drawing during the reception, led by three volunteering exhibiting artists. I couldn't resist- and led the final hour. Kind of-total absorption had already kicked in. Best figurative exhibit reception idea ever. If people weren't drawing, they were watching people draw. 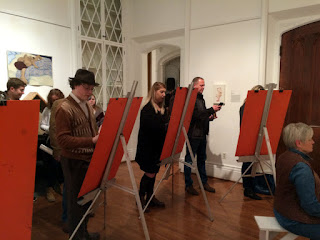 After, someone asked me if I had ever seen this done at a an opening before- and I hadn't...BUT I remembered later that at Carnagie Mellon University's symposium, Draw 2014, they had this event called "Drawing with Nicole Eisenman" (she won the Carnegie International that year) where they had nude models placed all over the Carnegie Museum after hours, and artists went to pose locations to sketch while Eisenman and her young daughter wandered around and enjoyed the process. It was an awesome night, and also the best idea ever. 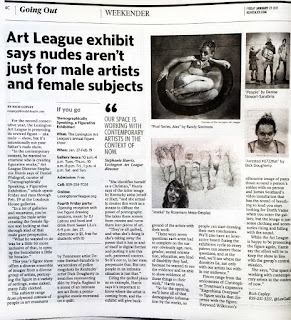 Posted by Denise Stewart- Sanabria at 11:02 AM