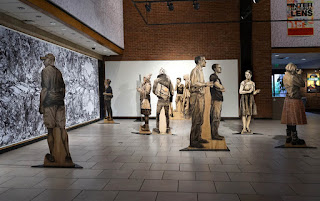 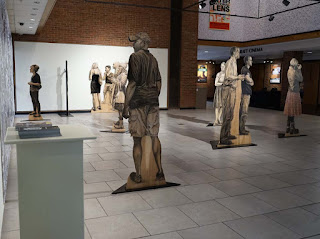 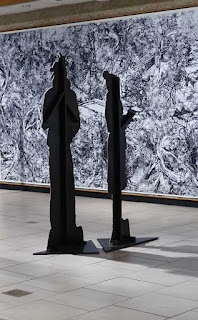 Wiener’s Longhand Forest is a story wall drawing of dense and detailed woodland, designed to be inhabited by the creatures of a vast classical bestiary described in Thompson’s poem. The line counts in Fibonacci Monstrosity are based on the mathematical sequence in which each number is the sum of the previous two numbers. The Brooklyn Rail described their installation saying, “Chaos and mystery flow through both of these worlds where rivers of science, legend, archeology, myth, and divine comedy converge.” The text and forest interplay is intended to launch the viewer off the densely inked edge into imagined space. Contemplating this space along with the viewers will be Stewart-Sanabria’s full-scale, virtual reality plywood people. 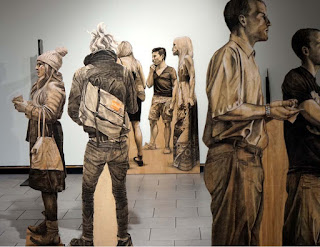 Stewart-Sanabria’s life sized charcoal drawings on plywood depict people in various conceptual situations. They are placed within an environment in both observational and interactive groupings. Many of them emerge or partially disappear into walls, as if the surrounding architecture is Quantum Theory multi-verse portals. The human presence is intended to show an attempted civilizing of the bestial, natural world of which humans are often reluctant to acknowledge they are a part of. 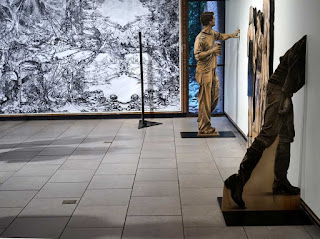 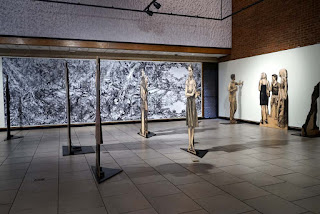 Posted by Denise Stewart- Sanabria at 9:38 AM