Nashville Arts Magazine had the idea that I interview myself for this exhibit: http://viewer.zmags.com/​publication/250f12a2#/​250f12a2/18 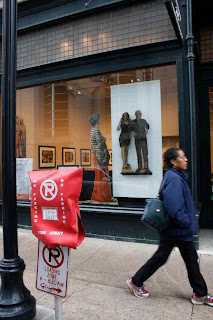 November, 2011/The Arts Company/Nashville, TN www.theartscompany.com This month, Jerry Parks, a Nashville photographer, and myself have a very Nashville-centric exhibit at The Arts Company. It was the gallery's 15th anniversary at it's downtown location, so it had to be all about the Nashville scene! I've got 35 charcoal drawings on plywood of people who attend and are a part of Nashville First Saturday Art Crawls. Five are full scale and free-standing,and the thirty smaller ones are mounted on wall shelves. Jerry has a series of photographs of the work spaces of iconic Nashville businesses, from Hatch Show Print to DelGado Guitars. 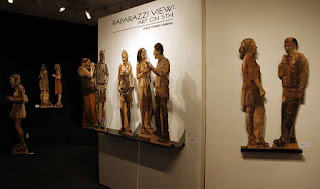 Detail of part of the gallery wide installation. The conceptual aspect of what I often do with plywood people has to do with replicating social and cultural behaviors of humans within various goups. Arts communities, no matter where they are in the world, have recognizable familiarity to the people that are a part of them-a certain like mindedness and attitude. When humans bond over shared interests, they almost become a form of international tribe. Like Trekkies, for example...ok-bad example. 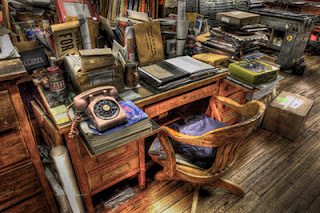 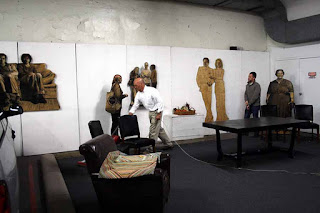 Staff action: Tinnen vacuming the garage space, Brian surveying. Not too many galleries are attached to both a private parking garage or have an additional massive 2nd floor gallery space in addition to their street floor gallery. This means that that the gallery can do witty things, like have "garage sales". Yes-it's ironic! 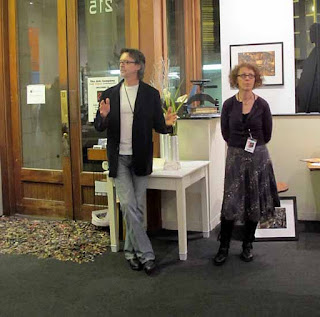 Jerry and I got to talk about our work during the Friday night Collector's Night preview. 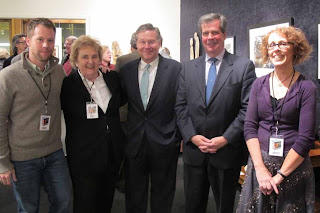 Brian Downey (gallery assistant) Anne Brown (director), Uh oh??, Nashville mayor Karl Dean, and me. Yes, I drew the mayor. He was hanging around one of the times when I was collecting photo references, and it was important to have many of the people important to the Nashville downtown arts and museum scene represented. 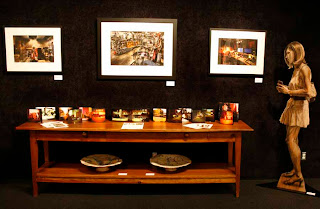 One of my full scales checking out Jerry's photos and my lomography work on the table. I take lots of lomography photos around Nashville, and print only one of each negative. Yes, lomography is analog. So, each one is an original, either on rag paper mounted on the panel, or transfered on into gesso-and they are "coffee table book from Amazon" priced. In fact, if you buy more than one, the price goes down per unit! 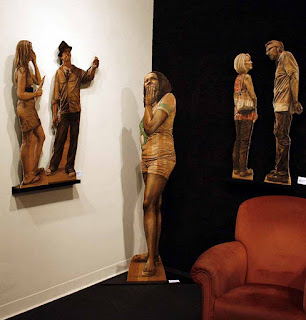 More plywood people in yet another corner. I knew who many of the people I drew were-some I had no clue. I don't ask people permission. That would ruin everything-it would become self-consious, and rendered artificial. 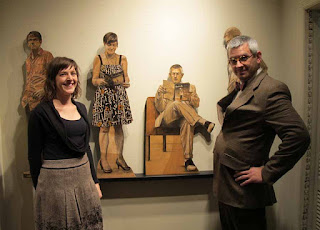 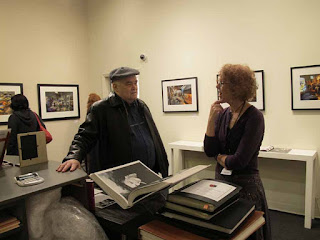 Talking with Marshall Fallwell who writes for www.artnownashville.com Acually, the reason I'm posting this is because it is about the only photo of myself where I don't look like a squirrel that has the mange. 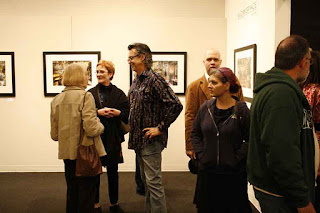 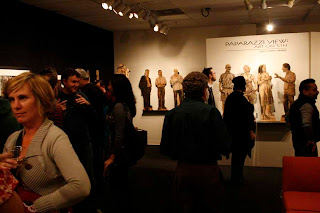 It was a nice turnout on a night where it didnt get cold or rain, and where the sidewalk freebee of the night was a local coffee company making free drinks. Nashville Downtown 1st Saturday Art Crawls include The Arts Company, Rymer Gallery, and Tinney Contemporary, lined up along North 5th Ave. of the Arts, with also a ton of galleries across the street in the 2nd floor of The Arcade Building. Twist is my favorite up there. Also, down at Broadway and Rosa Parks Blvd. is The Tennessee Art League building, where there are multiple exhibits at any given time. Unfortunately, Estel Gallery on Rosa Parks closed this month so owner Cynthia Bullinger could pursue other things. She ran the awesome gallery for five years and represented some amazing people, two of whom are friends of mine and who loved working with her. Estel's will be surely missed.
Posted by Denise Stewart- Sanabria at 11:06 AM